The Ñirihuau Basin Coal Project is located in western sector of Rio Negro province (Argentinean Patagonia), 70 km southeast of San Carlos de Bariloche City. The general area has low vegetation and altitudes of around 1,300 m. Access is reasonable with good gravel roads and farm tracks. The Ñorquinco railway station is 40 km to the south-east, and 65 km to the north is the Ñirihuau railway station. Both these railways connect to the national system and near the port of San Antonio Este (on the Atlantic coast) a distance of 600 km. This port is operated by a corporation Patagonia Norte and they have plenty of spare capacity as most of their cargo is seasonal. The main wharf is 200 m long so it can take reasonable sized ships.

Ñirihuau Basin is the second most important coal basin in Argentina (after the Rio Turbio deposit in southern Patagonia). The coal seams are in the Ñirihuau Formation, of Miocene age. The most important deposit in this basin is the Pico Quemado Mine, which was explored since the 1940’s through to the 1950’s by the State Mining Company YCF, who made approximately 3,800 meters of underground workings, and more than 1,000 meters of drillings. This supported shallow underground coal mining during this period, which was the principal mining technique utilised at that time.

Trendix Mining owns six exploration licenses in Ñirihuau Basin, with a total of 27,000 hectares. The tenements cover known areas of outcropping and deeper coal seams including Pico Quemado Mine area. The zone where the most important coal seams have been detected extends throughout approximately 22 km in sense NNW-SSE. Nevertheless, coal seams of smaller importance have been identified throughout all the Ñirihuau basin, therefore, the potential zone to be explored is the totality of the basin.

There are three main zones with known coal outcrops: Pico Quemado, Chenqueniyeu, and Las Bayas Zone. Trendix Mining have carried out a series of geological mapping programs, both in the Pico Quemado and Chenqueniyeu areas in recent years, which have confirmed the extensive nature of the coal seam sequence. The first phase drilling program was completed during April and May 2017, following a geological mapping phase carried out between December 2016 and March 2017. A total of 2,408 m was successfully drilled, 15 holes and 1,837 m at Pico Quemado and 8 holes and 572 m at Chenqueniyen. The drilling at the Pico Quemado deposit confirmed the stratigraphic sequence and seam thicknesses, matching the historic drillhole data of the 1950’s, and confirming its authenticity. The table below lists hole statistics and total coal seam intersections. 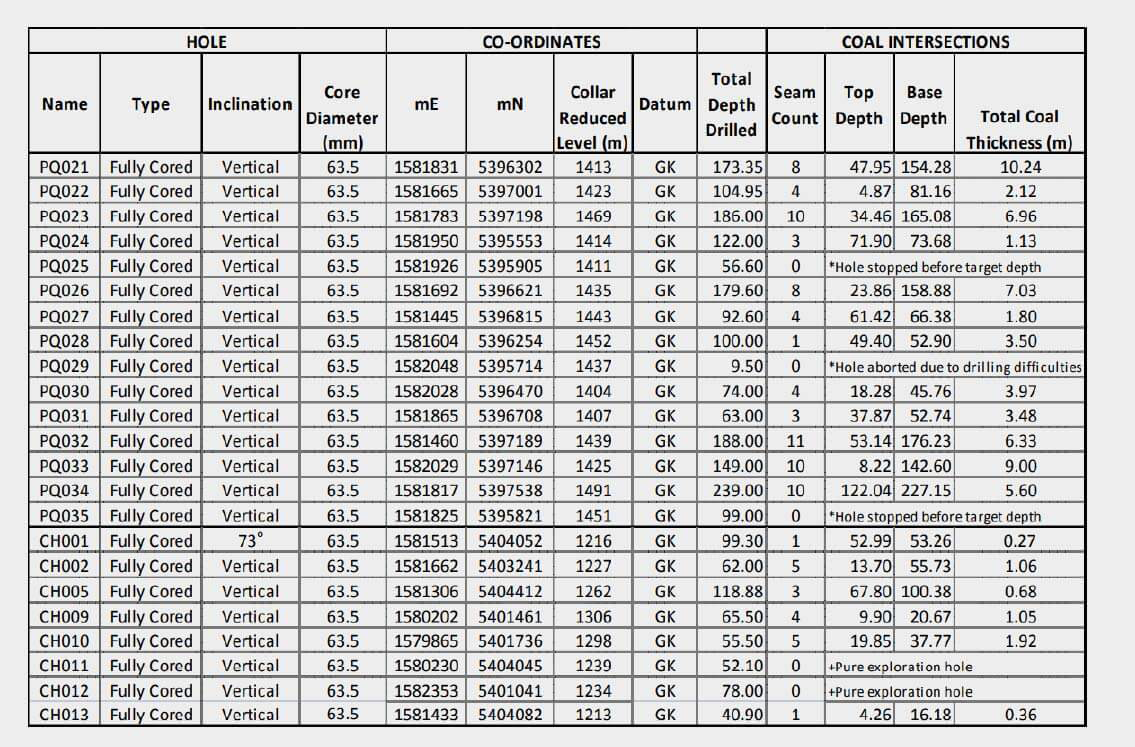 The Pico Quemado Zone is where the carbonaceous levels are better exposed, and therefore, where the greater effort was concentrated in the past. This zone includes an area of approximately 200 hectares, and the sediments that form it are folded forming a great synclinal, whose axis is dipping towards the SSE. Extensions of the originally defined Pico Quemado deposit were located to the south and north of the previously described deposit boundaries. Four coal seams have been detected, grouped in two sequences, separated by between 80 to 90 metres of sandstones and siltstones. The lower sequences (seams 1 and 2) displays a net coal thickness from 3.10 to 7.5 meters, whereas the upper sequences thickness (seams 3 and 4) is from 2.30 to 4 meters. The seams of the lower sequences is where the works were more concentrated in the past, mainly because its thickness and quality of the coal. The best seam intersections drilled in the current program were in holes PQ-021 (10.24 m), PQ-023 (6.96 m), PQ-026 (7.03 m), PQ-033 (9.00 m) and PQ-034 (5.60 m), all total in‐hole coal thicknesses. Drilling between Pico Quemado and Chenqueniyen located some good coal sequences, and confirmed the northerly extension into Chenqueniyen. Recently geological interpretation has widened the southern limit of the basin by about 2,500 meters, with the coal deposit open towards that direction. Therefore the next drilling plan should focus the exploration in this sector.

The Chenqueniyeu Zone is located to the north of Pico Quemado, and is an asymmetrical, southerly plunging syncline with a north-south axis. The sediments dip towards the centre of the basin with shallower dips on the western side, and steeper dips on the eastern side. The carbonaceous layers are part of the western flank of the syncline, and have a dip eastward ranging between 15° and 30°. Trendix Mining has identified five carbonaceous sequences of up to 6 kilometers, and thickness up to 12 meters (coal seams + carbonaceous shale). As mentioned before, this coal sequences extends into Pico Quemado Zone to the south. And to the north, the geological mapping and interpretation defined a correlation between this coal seam sequences and the carbonaceous levels found in Las Bayas Zone. So, from the southern zone of Pico Quemado and the norther zone of Las Bayas, we a have a 22 km long highly prospective area. Only a small part of this area was explored by the first drilling plan conducted in 2017. Eight diamond drilling holes were made at Chenqueniyeu (572 m), but the results were not as good as expected.

In terms of coal quality, it is a high volatility bituminous coal (American classification system) and owns a good cooking aptitude. Surface samples from the seam outcrops (which are only weakly oxidized) show both good quality thermal, and preliminary coking coal characteristics. Some of the recently outcrops samples analysis throws the following results: 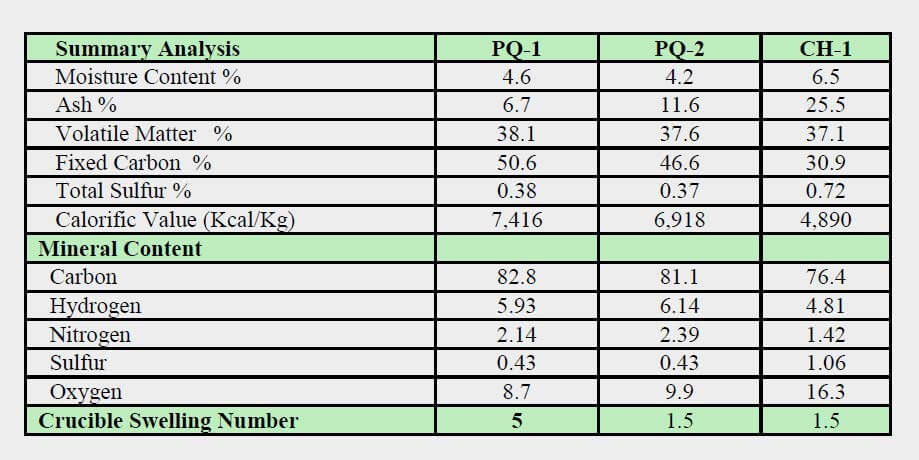 Extensive core sampling was carried out on the coal core with 210 individual samples collected utilising the complete core diameter. The samples were dispatched to the ALS Mendoza laboratory for assistance in export to the ALS Brisbane laboratory for testing. The results showed that coal in core samples was of lower quality compared to surface samples. This is explained by the fact that in the surface coal samples were selected only the coal levels, while the core samples sent to the laboratory test entire coal seam including the small levels of barren material (clays and volcanic ash). Coal seams in Ñirihuau Basin presents characteristics of being a laminated coal, with intercalation of millimetres levels of clays or volcanic ash. Therefore Trendix Mining plans to carry out some washability tests, to determine how much the coal quality improves. It should be very close to surface coal quality.

The exploration works carried out in Pico Quemado allows a preliminary evaluation of a resource of approximately 10 million tons. Considering that the deposit is open both to the north, south and east, a second drilling program could expand these resources. The depths and dips of the coal seams are such that it is anticipated that a good proportion of any coal reserves defined could be mined by open-cut. A better geology interpretation in Chenqueniyeu and Las Bayas Zones, together with geophysical studies and a new drilling program, will surely contribute more reserves to the project.

Potential markets for the coal would include power generation and general domestic industrial thermal uses along the eastern seaboard of Argentina, and export markets for coking coals. The continued increases in global energy consumption fuelled by thermal coal fired power stations being built in the emerging economies of China, India and Vietnam are expected to underpin world demand along with increasing demand from Europe (particularly Germany), South America and elsewhere.

Trendix Mining is looking for an investment partner to continue the exploration and development of the project.