The mining properties that form the project are fully owned by Trendix SA and cover a total surface of 6,181 has.

Uranium mineralization at the BCP project area, is related at silty and sandy soil levels with variable grades of develop of horizons with gypsum and carbonates accumulation. Mineralized thickness varies between 20 cm up to 1.50 m. and is developed from the surface until a depth of 2.40 m. Visible uranium mineralization is characterized by a yellow pale to brilliant (carnotite) appear disseminated in the matrix of calcareous soil either covering clasts.
Mineralization is open to the N and NW direction. 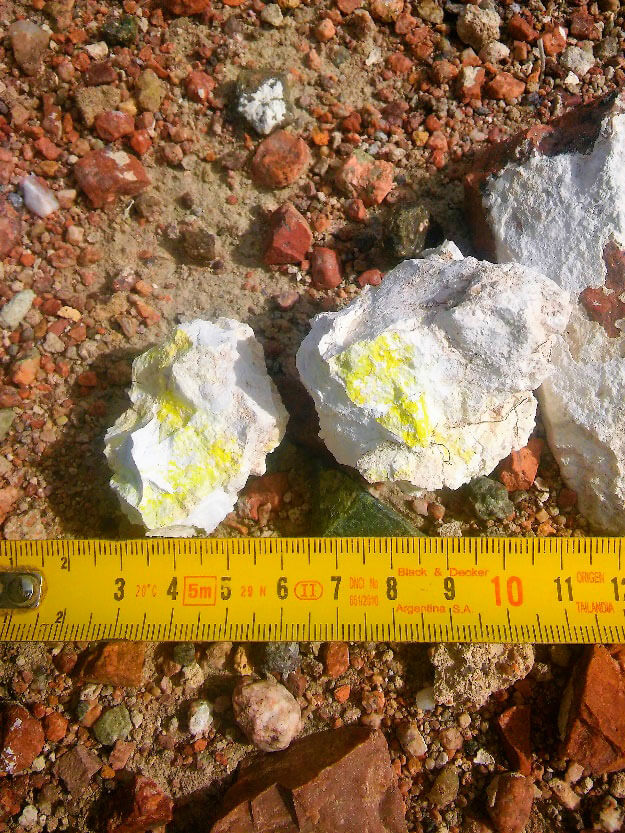 The age of sediments where mineralization is developed corresponds at upper Pleistoce to Holocene.

The exploration methodology consisted of detection and demarcation of abnormal points (1.5 - 2 times of background), with the use of centellometer on the field and roads. Started on the Southeast area of the Piche Graben identified like Prospect A, which encompass the calcareous sediments and occupies an area of 300 hectares.

In total were executed 45 pits with a total depth of 59 m. drilled and were extracted 20 samples for further analysis.

The proposal model for the exploration correspond at surface deposits that occupy geoforms of filling of valleys. In these deposits exists replacement or illuviation (defined as an accumulation process in a soil horizon of elements originated in other overlying), of calcareous material, gypsum, halite, dolomite, FeOx and MnOx in fine lithologies related at the movement of cations and anions in the vadose zone. These deposits are typically associated to Tertiary or Quaternary formations of fluvial - alluvial origin and even eolic. The uranium
mineralization is often in the form of Carnotite (K2 (UO2)2 (VO4)2 3H2O).

Uranium deposits associated with calcareous levels are the superficial deposits of larger size who are exploited today in all the world.